Terrence and Rosci Park It

After much speculation Terrence and Rosci confirm they will be leaving 106 and Park. The pair, who have hosted the show for 7 years are moving on as their careers are beginning to blossom outside the network. Terrence has acting gigs left and right and is enjoying the success from Think like a Man, Act Like a Woman as the movie passed 90 million this weekend making it a sure in for a 100 million dollar earner. Rocsi also is getting her acting feet wet as she currently is filming a new movie. While many had opinions on the pair they were loyal to each other and really put the show on the make internationally. Watch the pair announce their departure below and tell us what you think in comments or @mediamyxx @akireshenri

This week BET put out their rooster for the upcoming year and we are pleased to announced 3 of our favorite shows are coming back. The Game, Let’s Stay Together and Reed Between the Lines are all coming back next year and we couldn’t be happier. Also joining BET is beginning of TV movies specifically for the channel including Gabrielle Union, Larenz Tate and many others. I am so excited that BET continues to expand their programming for the better. Read more of the upcoming programming on BET and Centric here:http://www.sacbee.com/2012/04/18/4423035/bet-networks-unveils-new-programming.html and let us know what you think in comments or @mediamyxx @akireshenri

Tagged BET, Let's Stay Together, Reed Between the Lines, The Game
Leave a comment
Reality Bites

Our favorite twins Tia and Tamara Mowry are brining their hit reality TV show back to Style Network this June. The show which is hold the record for viewers on Style Network returns this June. The show has done wonders for the twins who are becoming best know for Sister, Sister reruns as their careers are making a return. The pair started their own production company Twilight Productions which produces the show and Lifetime movie Double Wedding . Back in demand the duo were recently signed to United Artist so I am sure we will be seeing a lot more of them. Tia landed the lead role as Melanie Barnett-Davis in BET’s The Game and has a role in an upcoming musical with Tori Spelling on ABC Family channel coming soon. Tamara worked on a short-lived sitcom on ABC family but we have faith she will get back in the running for a hit show soon. Will you be watching the second season of Tia and Tamara

Tracee Ellis Ross has been tapped to film the pilot for a new NBC show called Bad Girls. Tracee will play a business woman jailed for selling fake morgages and desperate to have a child. Tracee starred and produced BET show Reed Between the Lines with Malcom Jamal Warner. While the status of the show has not revealed I am hoping it will be back for a second season. Are are excited for Tracee? Will you watch the show? Let us know in comments or @mediamyxx @akireshenri

In Persuit of Happiness?

In Black America we love a good march, a good complaint about how we are misrepresented and then when we get what we want we let it fall by the wayside. When the CW canceled  The Game shortly after canceling Girlfriends we were up in an outrage. We didn’t get to say goodbye, we noted how they had similar ratings to other shows on the network but they were not canceled like Gossip Girls and Smallville but we knew why The Game was canceled. We have been through this all too many times before losing a good show due to ratings. We want more of “us” on TV, we want to have good characters with good storylines, we want to be shown in a good light. Well BET stepped up and answered the call tired of criticism about their programming BET got rid of the superfluous rap shows and began to invest in original programming. First on the channel’s list was bringing back The Game. Well since the show has come back to TV all we have done is complained, complained about it being on BET, complained about the storylines, the acting, the everything. We are so busy complaining we don’t release how big a moment this was for us. Mainstream TV talks about The Game all the time, the ratings were through the roof, BET made a ton of money on advertisement and it has allowed us to put the spotlight on our talent. Let’s Stay Together, Reed Between the Lines and other shows are in the pipeline and A list talent are lining up at BET to star and produce shows. So the question remains what the hell are you so angry for. If you don’t like the storylines then complain to the writing staff on twitter and Facebook but stop with all the hating. The Game’ s success on BET is directly responsible for Laz Alonzo and Tracy Ellis Ross being snapped up by NBC for pilots. While I will be the first to admit the writing staff for The Game really needs to step it up, I am also proud of the success it has seen and more importantly ushering a new era for Black entertainment. Let me know what you think in comments or @mediamyxx @akireshenri

Gabrielle Union signs on to do a new show with BET named Single Black Female. Union joins a long line of Black stars finding their way to BET to front their own shows leading the way is The Game , Reed Between the Lines, and Let’s Stay Together. The show will be based in Atlanta like the other shows and will also be written by husband and wife do the Akil’s. Read more about Union’s new show here:http://www.washingtonpost.com/blogs/therootdc/post/gabrielle-union-to-star-in-bets-single-black-female/2012/03/05/gIQA3H3tsR_blog.html?wprss=therootdc and tell us what you think about the new show hitting your TV screens.

On last night’s episode of Let’s Stay Together Charles gets sick and wants Stacy to ditch her patients and stay home to take care of him the way a wife should. When Stacy chooses to go to work Charles calls his mother Delores played by the fabulous, Jackie’ Harry, she makes Stacy feel bad for not taking care of Charles and prompts her to call out the following day . When Stacy is taking care of Charles the following day she finds out Charles is no longer sick but wanted her to stay home to find out if she cared. Stacy went through a laundry list of how she shows Charles she cares and the couple enjoyed their day off. Stacy found herself with Charles cold and had to be taken care of by Mama Delores. Troy continues to manipulate Jamal and Tasha with his vast cash supply. After hiring Jamal and hanging out with him he offers Jamal a raise and promotion to open up the LA branch of his business. When Jamal was taking care of the baby it became clear his   aim is to get Tasha back. I have to say I enjoyed last nights episode and cannot wait to see what happens next week. Let us know in comments or @mediamyxx @akireshenri if you liked last night’s episode 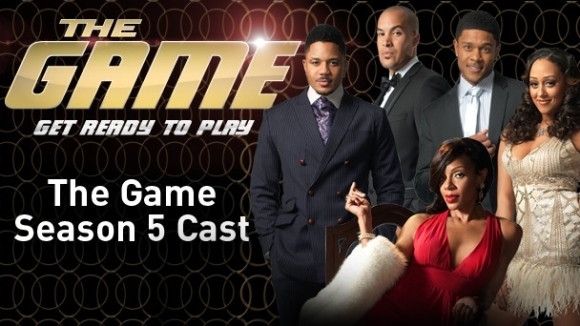 On last nights episode of The Game Malik had to sell his mammoth mansion which was his dream home as child to curb his spending during the lockout and his stalled career. Melanie and Tasha continued the petty beef they have taking it to a bar trying to out tip each other with a waiter named Javier. I am really hoping they move past this next week as the back and forth has worn out it welcome for me. Jason was blindsided as his show added a blonde co-host. Jason ran to his staple of reality his wife Chardonnay, the neck rolling,sass mouthed, weave wearing brown girl Jason accidently married. This story-line  was cute at first but it is getting boring real fast. I am hoping next week the action picks up and the show begins to move forward, there seems to be writing block over at BET. Tell me what you think about last night’s episode in the comments or online at @mediamyxx @akireshenri

Tia Mowery  is doing the damn thing on the small screen. Not only is she the lead actress in B.E.T.’s The Game but she is a co-star on Style Network’s Tia and Tamera, the reality TV smash with her twin sister Tamera and now she landed a lead role staring opposite Tori Spelling in the Fox Family channel’s musical named  the Mistletones. The musical focus around Mowery not making the Mistletones, a group her mother starred in years ago but Mowery loses her position to Spelling. Mowery starts a rival group to the Mistletones to continue living out her dreams. Read more about Tia’s new role here:http://www.bet.com/content/betcom/news/celebrities/2012/02/02/tia-mowry-lands-lead-in-abc-family-movie-musical.html and tell us what you think about Tia’s new role in the comments or @mediamyxx @akireshenri

Nicki Minaj”s new video Stupid Hoe reportedly has been banned from the network. The network think it is too raunchy and with the word hoe being used over and over too much for its station. I am not surprised nor upset by the move as the song and video is just awful and clearly by its current status on Billboard so do you. Nicki’s sophomore album Pink Friday: Roman Reloaded was delayed until March or April. You of course can watch the video on Vevo to see what the fuss if about and let us know what you think hit us up in comments or @mediamyxx @akireshenri  and read about the video banning over at TMZ.com