The Passion of the Tim

When University of Florida quarterback Tim Tebow started his career in the NFL with the Denver Broncos, he came off a storied college career in Gainesville. While his rookie year wasn’t one for the history books the NFL star begin to get more attention for his off the field life than his winning ways. So is Tebow a typical jock with models and mayhem in the off-field, no he is a man of God and apparently it’s an issue. As Tebow began praying after touchdowns and standing firm on his believes he became a sensation for mockery by late night pundits and nay sayers everywhere. In this day and time if you have any kind of morals or standards you are tagged boring, and fake. It is pathetic to me that is Tim was juggling two models he would have a better reputation than getting on his knees to pray. Look I am not religious by far but what is happening in society when praying and having strong faith leads to backlash and ridicule. At what point to sports pundits grow out of the “jock” stage and show some time of brain inside their over muscular brains? For his part Tebow is unfazed by the attention and continues to work at his craft on and off the field. As the Superbowl approaches and Tom Brady and Eli Manning take the field I can’t help but wonder when Tebow will get his turn to rub his God’s Son reputation all in these haters faces. Because let’s face it at the end of the day the man is a winner and has the heart of a champion which should be all that matters in the first place, right?

Tomorrow ends the weeks of sports pundit talk,creative sports journalist , and fan hysteria as the Giants and Patriots finally take the field to battle it out for the championship. The teams will be hosted in Eli  Manning’s big brother Peyton Manning home turf of Indianapolis. Fans and celebrity hangers-on are all in the city trying to be seen. Who are you rooting for and who do you think will win the big game tomorrow hit us up in comments or @mediamyxx @akireshenri

Madonna is coming back is a huge way. The icon is performing at the Superbowl and dropping a new single featuring MIA and Nicki Minaj. Give Me All Your Luvin video will premiere on American Idol  look at the single cover and tell us what you think in comments or @mediamyxx @akireshenri 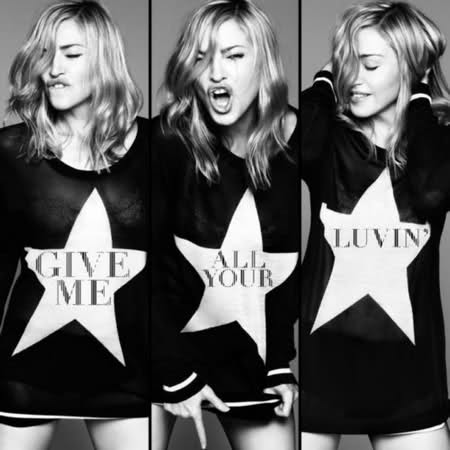 Last night’s NFC championship game went into overtime as the Giants beat the 49ers 20-17 to clinch the second spot in the Super Bowl. The Giants continued to fight and recovered a fumble by Kyle Williams off a punt that sealed the deal for the game. Eli Manning wasted no time getting the G men down the field and into field goal territory where unlike Baltimore’s Billy Cundiff, Lawrence Tynes hit the field goal ending the game. This win with give us a rematch of the 2008 Super Bowl Giants vs Patriots. Tell us what you think about the game on twitter and who are you rooting for in the Super Bowl?

The Brady Bunch goes to the Super Bowl

Tom Brady and his Patriots are once again going to the Super Bowl. The New England Patriots edged out the Baltimore Raven 23-20 in a nail biter. The Raven’s had a chance to tie and send the game into overtime when Raven’s kicker Billy Cundiff missed the 32 yard kick. The Patriots are now waiting to see who will win between the Giants and 49ers to find out who they will be playing but right now the players can sit back and enjoy the AFC championship . Congrats to the Patriots and prayers to Billy Cundiff you will need them.

You would have had to be hiding under the rock of Gibraltar to not hear the Tim Tebow talk this past week. The Denver Broncos quarterback and proud disciple of Jesus got picked apart by pretty boy Tom Brady leading his New England Patriots to a route of the Denver Broncos. Tim Tebow has been the topic of discussion since he brought the Broncos back in the previous week against the Pittsburgh Steelers in overtime. Tebow was a sensation besting Beyoncé’s twitter record and becoming an instant pop culture phenom. Praying got replaced with “Tebowing” and everyone from SNL to Jimmy Fallon had Tebow skits in their respective shows. Clearly Tom Brady didn’t appreciate not being the center of attention as he completely picked apart the young quarterback. Tom wasn’t in the mood to be Goliath to Tebow’s David as he threw five touchdowns in the first half alone. The final score was 45-10 and now the press can resume to their Brady love affair, the quarterback with the good looks, model wife and deadly arm. Tebow will go on to be a huge snag for evangelistic Christian groups to rally around not to mention the hordes of other companies looking for the evangelistic Christian dollar. Tebow may not have won the game on the field but he clearly won in field of public opinion and all eyes are on his footprints he makes on and off the field.

Time again for us to countdown the biggest stories of 2011. This time we are counting down the stories in sports that kept us glued to the edge of our seats. Clearly the biggest story in sports this year was the retirement of football coach Papa Joe Paterno under scandal from Penn State here are the other nine stories that made the year in sports: