One of the more popular episodes of this year’s Basketball Wives, on VH1 was the altercation between star Jennifer Williams and Nia Crooks the assistant and friend of Evelyn Lozada. During the spat Nia slaps Jennifer across the face and the girls do a salsa dance before being pulled apart. After the altercation Jennifer filed criminal charges against Nia, and let the world know that Nia is worth anything. She can’t sue her for anything because she doesn’t have anything, then promply sues her. Jennifer has stayed on her soapbox all season long pretending to care about violence against women, being a role model or anything that makes the public feel sorry for her and give her a storyline for the season. Well Karma came for Jennifer , TMZ is reporting the white people called and they want their Bentley back. Jennifer is now facing a lawsuit for the remaining balance of the car and they also want possession of the car as the car hasn’t been paid on since 2009. I definitely will not laugh at someone’s misfortune but hopefully Jennifer will not take shots at people about them not having anything because Karma is a mean bitch and will put you on your ass if you are not careful. Read more about Jennifer’s repo situation here and let us know what you think in comments or @akireshenri @mediamyxx

Rihanna ‘s performance on SNL was lackluster and while that is normal this time the media didn’t seem to give her the unusual benefit of the doubt. In an unusual show of honesty EW.com slammed the lifeless performance (which is normal) but they rated her  somewhere between Lana Del Rey’s narcoleptic gyrations and Ashlee Simpson’s infamous JigGate of 2004. Ouch that was rather brutal also chiming in was TMZ who reported Rihanna angered the SNL staff by not showing up to final rehearsals claiming to be sick even though she was out partying the entire week. Rihanna’s team swears she was sick and kept her from wasting her voice. If you have followed Rihanna you would know that Rihanna gets sick around scheduled performances a lot, last year she famously caught the flu right before a charity resulting in Donald Trump calling out the Bajan as she was well enough to party that evening taking shots with Jay-z and perform the next day for the NBA All -Star game. Rihanna also canceled a performance for the EIF cancer foundation for being “sick” but was able to make it to the Roc Nation brunch. This isn’t new to Rihanna and her team either she was citing as sick during her GGGB tour in Europe for venues she didn’t sale out but was able to attend a Prince concert .  We will see if Rihanna gets it together or continues to spiral out of control, so let us know what you think in comments or @mediamyxx @akireshenri

Mary J Blige had black twitter on high alert after her hilarious Burger King commercial was released. From the lyrics to the song to Steve Stout saying that was #nottanning I have had a few good chuckles at her expense. Mary J went to TMZ.com to release a statement about her intentions with the fast food chain. Read the statement below and tell us your thoughts in comments or @akireshenri @mediamyx

“I agreed to be a part of a fun and creative campaign that was supposed to feature a dream sequence. Unfortunately, that’s not what was happening in that clip.”

“I understand my fans being upset by what they saw. But, if you’re a Mary fan, you have to know I would never allow an unfinished spot like the one you saw go out.”

Burger King confirms the ad was released prematurely “before all of the licensing and final approvals were obtained.” The fast food giant also says, “We would like to apologize to Mary J. and all of her fans for airing an ad that was not final.”

Chris Brown and Rihanna cozy at her birthday party

Say it ain’t so Ri Ri.  Sources confirm that Chris Brown and Rihanna were spotted cuddling together at her birthday party.  According to TMZ.com, Chris Brown was so nervous about people seeing him at the party, that he attempted to have his enterouge have all the party-goers sign a confidentially agreement.  Well ofcourse, everyone didn’t sign the agreement and word got out, along with a picture of Ri Ri’s cake, a blunt with a model of Rihanna riding it.  Ironically, we didn’t think anything could top Miley Cyrus’ penis cake for her birthday but we were wrong.  Again happy birthday Ri Ri, and we at mediamyxx have one question, Did you get your birthday spanking? 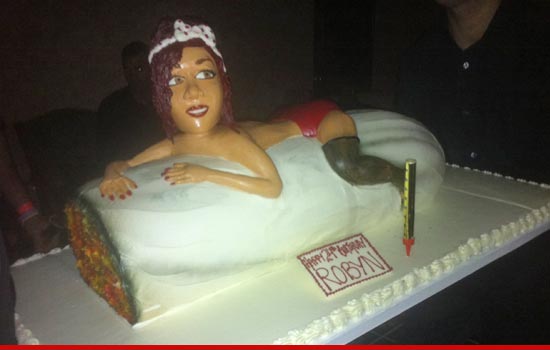 Nicki Minaj”s new video Stupid Hoe reportedly has been banned from the network. The network think it is too raunchy and with the word hoe being used over and over too much for its station. I am not surprised nor upset by the move as the song and video is just awful and clearly by its current status on Billboard so do you. Nicki’s sophomore album Pink Friday: Roman Reloaded was delayed until March or April. You of course can watch the video on Vevo to see what the fuss if about and let us know what you think hit us up in comments or @mediamyxx @akireshenri  and read about the video banning over at TMZ.com

Vanessa Bryant got a hell of a package for her troubles with ex basketball star Kobe Bryant. Vanessa not only got half of the couples 150 million dollar net worth but Ms. Bryant got the 3 homes the couple owned. Kobe will have to find another place to stay. In other News TMZ is also reporting that Basketball Wives is in hot pursuit of Vanessa Bryant and hoping to get her on the show. I have to admit that would be awesome to have her on the show Kobe and Shaq’s ex wives together that is good TV. Let us know what you think of Vanessa’s care package on twitter @mediamyxx @akireshenri and read the other details of Vanessa’s score here:http://www.tmz.com/2012/01/20/kobe-vanessa-bryant-divorce-settlement/